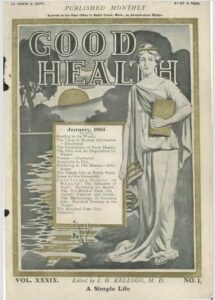 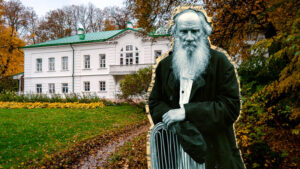 Among modern apostles of the gospel of simplicity none is so well known nor so far-reaching in influence as Count Leo Tolstoy. The whole world has heard his plea for a simpler life, and beheld his effort to practice the gospel he preaches, a spectacle which William Dean Howells regards as “the most impressive of the century”.

The beauty of natural health and strength, and the happiness of a simple life spent with nature, “seeing, and holding converse with her,” first powerfully attracted him when a young man in the army, on an expedition to the Caucasus, a land of wonderful scenery and primitive customs.

In process of time, as his conviction deepened, he was led to forsake the palace for the fields, the aristocratic circle to which he was born, for the society of the Russian peasantry on his estate at Yasnaya Polyana. Among these he mingled on the equal footing of a common brotherhood, endeavoring by degrees to renounce all that they could not share with him on the same terms.

Abjuring all the modern luxuries common to men of his station, Count Tolstoy lives, as far as his personal habits are concerned, a life of severe simplicity. It is doubtless largely due to this fact that he is, at the age of seventy-five years, a man of tireless energy full of fire and vigor of youth, with a suppleness and activity that are the admiration and envy of a younger generation. The purity of his physical habits has enabled him to retain such mental vigor and clearness that he can at this advanced age continue his literary labors apparently without his vibrant utterances. Our illustration gives some idea of his remarkably fine physique and powerful presence, showing also the picturesque simplicity of his garb, which is that of the moujik – a long blouse loosely belted with leather, adapted to all the requirements of comfort. In earlier years Tolstoy was threatened with consumption, from which dread disease he lost two of his brothers. He finally overcame this tendency, however, by living in the Steppes in a tent, and drinking kumiss in abundance.

From conviction as to both its physiological and ethical significance, the Count is a vegetarian. He firmly believes in the high nutritive value of man’s original diet, and enjoys it accordingly. His two oldest daughters share his convictions, but the other members of his family are flesh consumers. Notwithstanding this, the Countess has, for the sake of her husband, made a special study of vegetarian dietetics, and has acquired such skill that, as she long ago remarked, she could, if necessary, “give dinners of grains, fruits, and vegetables for three hundred and sixty-five days in the year, and never duplicate one”.

Though an abstainer from liquor and tobacco, the Count at one time was addicted to the vice of copious tea-drinking so prevalent in all classes of Russian society.

The tea is served to the women in cups with cream and to the men in glasses with lemon; and it was no uncommon thing for the Count to drink twelve or thirteen glasses at one sitting. This needless and harmful self-indulgence he has since renounced as not in harmony with his principles. His favorite beverage at the present time is “barley coffee” diluted with almond cream, an altogether wholesome and nourishing drink.

One who visited the Tolstoy house-hold, arriving when the family with their numerous guests were at dinner found the Count and his eldest daughter, Mascha, very simply and plainly dressed, sitting, alone at the foot of the table, apparently eating nothing during several courses of the feast. At last a maid entered with a loaf of rye bread and a plate of pottage for each, and this constituted, on that occasion, the whole of their simple meal.

In a country like Russia, where “one is ever reminded of the fiat that he must eat and drink without the slightest reference to needs or else be regarded as morbidly unsociable,” the Count’s attitude in this respect is especially impressive. In the extreme simplicity of his diet, he is striking a blow at the idleness and sensuality that prevail among the upper classes, believing that it is best to attack first those vices which are the source for the others. One who is self-indulgent and gross in physical habits cannot successfully resist immortality. According to his view, whatever is unhealthful immoral, since morality depends in great measure upon physical purity. In harmony with this view he believes in and practices vegetarianism as “the first step toward moral living,” since flesh meat is not the proper food for human beings, “and serves only to stimulate animal passion, lust, luxury, and drunkenness,”

But while Tolstoy’s vegetarianism is based on the physiological foundation of pure and healthful living, it has also its ethical support. The painful mystery of sufferings of the brute creature appeals to his sensitive and sympathetic soul, and makes him fear to take life needlessly in order to sustain life. His objection to the taking of animal life is not so much account of the violence done to the animal, as on account of the violence that man does to himself in overcoming his innate horror of slaughtering living creatures, and in crushing the instincts old sympathy and mercy implanted in the human breast by the Creator.

A hard bed and leather bolster are essential to Tolstoy’s repose, anything softer and more luxurious only wearying him. On account of his strenuous open-air life, sleep comes easily to him, and he rises very early in the morning and takes a cold plunge in a bath situated at some distance from his dwelling, restoring circulation with vigorous gymnastic exercises. He then returns to his simple breakfast, usually consisting of oatmeal.

As a part of the gospel of simplicity Tolstoy proclaims the doctrine of labor. His ideas as to dignity of labor and the degradation of idleness were stimulated by investigation made in Moscow with view to starting philanthropic work there for the amelioration of some of its misery. Among the poor, working classes he found more happiness than he had expected. The only hopelessly useless class that he discovered were those who had belonged to the higher classes, and who, when losing their wealth, had retained their notions as to the degradation was thereby led to abandon his philanthropic projects, and devote himself to the eradication of these false views of life. His theory is that one should not live “by the labor of others, but by his own for the good others; and this he has vigorously taught by voice, pen, and practice. This doctrine, also has its physiological side; for physical health, mental clearness, and spiritual well-being.

Through long self-training in correct habits, abundance of physical exercise has become with Tolstoy so essential to mental activity that he finds himself good-for-nothing if he omits it even for a day; he can then neither read nor write, nor even listen attentively. Most of the time not devoted to literary work is spent in active exercise in the open air. His physical culture is all made to serve some useful purpose. In summer it takes the form of ploughing, mowing, felling trees, etc.; in the winter, of drawing water, chopping wood, and keeping his room in order. A part of his study is fitted with a cobbler’s outfit, and here he occupies himself on rainy days, making foot gear for himself and others. Thus, according to the light that is in him, this modern apostle endeavors to persuade men by his words, that life of useful labor is more honorable the one of pampered idleness, and that “not to be ministered unto, but to minister,” is the divine ideal.

The cookies defines under this category are absolutely essential for the website to function. Hence they are loaded by default irrespective if user consent. Cookie Description: - PHPSESSID This cookie is native to PHP applications. The cookie is used to store and identify a users' unique session ID for the purpose of managing user session on the website. The cookie is a session cookies and is deleted when all the browser windows are closed. - viewed_cookie_policy The cookie is set by the GDPR Cookie Consent plugin and is used to store whether or not user has consented to the use of cookies. It does not store any personal data.